The last time I posted I wrote about a new grandson and making a bed for him that will follow him for many years in to the future.  It is called a 3 in 1 bed and I have known about it since my first grandson, Kai, was born 8 years ago.  I offered then to make it for my son and his wife but it never came to be.

In the first 2 pictures are the new 3 in 1 bed made up as a crib.  There is a new side that makes it in to a juvenile bed.  And there are new bed rails and foot board to turn it in to a twin bed.  The third photo is the new bed and the cradle that I made for my other grandson, 8 years ago, when he was born.  Being used by a new member of the family, which is good.

Since then I have made a lot of pieces for the family.  Things like a dresser and 2 sideless side tables for my daughter and her husband.  A coffee table for my son in Austin, Tx.  That one was interesting as I needed to build a shipping crate around it and ship it by ground transport.  The receiving dock where it arrived allowed him to tear down the crate and put it in to recycle containers so that just the coffee table would fit in to his car.

The most prolific recipient of my woodworking has been my wife, known as Sissy to the kids and grandkids.  When she decides she wants something she just says as much and voila she has it.  I have made an 8 foot tall pantry, “Franken-table”, multiple little tables for a range of uses from being at the end of the couch to under the window with all of our plants on them to supporting out new 55″ LG flat screen TV.   She has friends who are jealous of the fact that she can get whatever piece of furniture she wants by just asking for it.

My big deal this year is what I call a commission although in the strictest sense of the word that is not what it is.  What happened was that last year I saw in the newspaper an advertisement from a local theater for woodworkers to participate in a fund raising event.  Basically one of the theater patrons had purchased a local horse farm over 40 years ago and when they bought the farm there was milled lumber in one of the stalls.  Not exactly sure what species it was they offered it to the theater for them to provide, free, to local woodworkers.  In exchange the woodworkers would make items that would be sold by the theater with the proceeds being split between the theater and the woodworker.

The majority of the wood was cherry and since it was at least 40 years old, some estimated it was more like 60 to 70 years old, the color of the wood was amazing.  Although the storage conditions were less then ideal so much of the wood was compromised: punky, rotted, soft, etc.  I decided that the wood was an ideal candidate to make a pair of sideless side tables therefore showcasing the wood as the sides of the drawers, legs and top.

I was worried about the strength of the wood as legs so I decided early on that I was going to glue thin strips of white oak to two adjacent sides of the legs and then position the legs so that they were the inner surfaces.  Although I do not know if there is an official woodworking term for this technique I called them boots.   I put an amber shellac on the entire piece as a finish brushing it out with Taklon brushes.  I purchased my shellac from The Shellac Shack on the internet.

The sale was in early October 2018 and I had the tables finished in plenty of time but was struggling with the handles / pulls for the drawers.  Conventional hardware purchased at a home center was not going to do.  I am aware of hardware sites on the web who specialize in higher quality fixtures like Horton Brass but I could not find a shape that was appealing to me.  Finally my sister who lives in Potsdam, New York stopped in for a visit and I was showing her the tables and grumbling about the hardware when she picked up a piece of wood left over from the build that was slightly decomposed and said ‘why not use something like this’.  Needless to say it was the perfect solution to a very custom build using wood that was no longer available.

The sale of the times; 21 in total ranging in price from $30 to $7000, was to be conducted initially by displaying the items for a week in the theater and allowing the public to come in and see the items.  At the end of the week anything that did not sell was to be auctioned on Saturday.  Each woodworker was asked for a floor price and an auction minimum (which was to be below the floor price).  I was curious to see what everybody made so I went on Wednesday with Sissy.

We were walking around admiring most of the pieces (the $7000 sculpture was impossible to admire because it was not possible to admire what that woodworker made) when I heard a couple say ‘I have to have those tables’.  Of all the pieces there only one project was plural and that was my tables.  Shortly she got one of the staff to help her purchase the tables and I got to meet the customer.  Her comment was ‘those handles are perfect’. 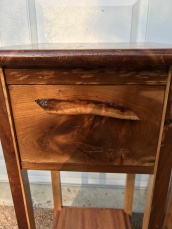 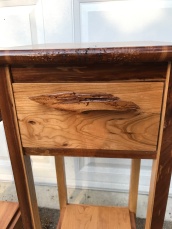 I have 2 major projects ahead of me.  A dining room table for Sissy.  She is leaning towards a draw leaf design.  And a 4 poster bed for my sister, Cherie.  When in Ohio a number of years ago I went to Keim’s lumber center and found the perfect cherry slab to use as a headboard for the bed.  I may be able to get it cut in half by a sawyer my son-in-law knows so that I can use it for both a headboard and a foot board.

In the meantime I have been keeping myself busy making nick knacks and what nots.  I spent a bunch of time making cutting boards.  Now I am on a jewelry box binge and I have played around with making games (Tic Tac Toe) and wooden bracelets.

That is all for now and I will write about the bed and table as they get farther along.

I created an Etsy storefront the other day and linked it to this blog.  I hope I sell something.